In this article, I’ll discuss what neumorphism is, how to get started on creating basic neumorphic elements and the limitations of this design trend.

Neumorphism marries skeuomorphism and material design by implementing a minimalist approach while giving a sense of three-dimensions in the form of buttons and other elements. Neumorphic elements sit right on top of the background surface and are usually a raised shape made from a very similar material to the background. The color of the element is either the same or subtly different from the background surface.

This Dribble shot by Andrew Mamontov gives you some sense of what neumorphic design looks likes but to have a clear idea about what neumorphism actually is, we first need to learn about skeuomorphism and flat design.

Skeuomorphism is a term used to define an interface that mimics real-world items. The most common examples are the recycle bin icon on your desktop screen and the dial icons on your smart phone. They both represent real-world objects users are already familiar with: a trash can and a landline phone.

Skeuomorphism had a huge impact on the early days of computing because it made interfaces more familiar and intuitive for users.

Skeuomorphism served as a bridge between the physical and the digital world. The buttons were purposefully made to look glossy and raised to mimic a real-life button. However, with the popularity of smartphones, people became accustomed to the graphical user interface. Skeuomorphism played less of a role in UI design as time progressed. The three-dimensional elements became unnecessary and made the UI look cluttered. This led to the rise of flat design.

More From UI ExpertsWeb3 UI Will Suck for a While

What Is Flat Design?

Flat designs moved away from the three-dimensional elements of skeuomorphism. Flat design is inspired by minimalism. The flat design avoids gradients, shadows and textures to focus on user experience (UX) with the use of simple flat elements and flat solid colors.

Apart from flat design’s aesthetics, the main benefit is its implementation. It is far easier to scale flat design elements and make them responsive over different screen sizes.

However, flat design is limiting at times and may make designs too minimal and less intuitive. Therefore, an improved and evolved form of flat design came to the fore: material design. Material design makes the use of animations and gravity; it has a sense of physics. In other words, material design uses skeuomorphic principles subtly by implementing shadows and z-index to give a sense of elements being on top of each other.

More From Built In Experts9 Material Design Guidelines, According to Google

Neumorphism started with Alexander Plyuto. While everyone was moving away from skeuomorphism, he designed an interface that showed how modern applications would look if skeuomorphism were still alive and well.

Alexander Plyutto’s 2019 dribbble shot went viral and inspired many designers to make their own version of neumorphic design; the name came to life in the comment section of an article by UI designer Michal Malewicz.

Neumorphism marries skeuomorphism and material design by implementing a minimalist approach while giving a sense of three-dimensions in the form of buttons and other elements.

Career Advice From Built In Design ExpertsDon’t Major In Design. Do This Instead.

How Can I Create a Neumorphic Effect?

I used two shadows: a negative and a positive drop-shadow on a slightly off-black background. This effect does not work on a completely black or white background since it uses dark as well as light shadows.

I used the same concept to multiple elements to create a layout for a neumorphic calculator. You can check out the file on Figma. 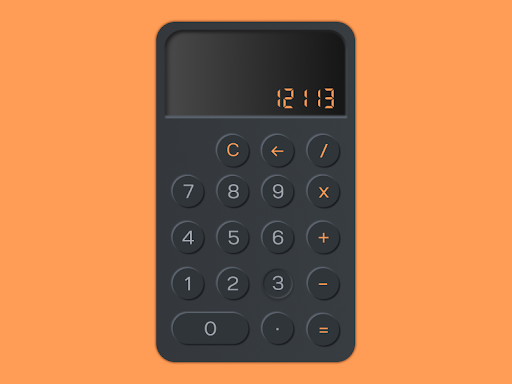 What Are the Limitations of Neumorphic Design?

While neumorphic design is aesthetically pleasing, it certainly has a lot of limitations. The subtle differences in the color value make it look minimal and aesthetically pleasing but having a low contrast ratio presents an accessibility issue. While it’s possible to achieve different states of buttons such as active, pressed and hovered with the use of different types of shadows, you might not be considering users who are blind or who have low vision. Moreover, it’s a major challenge to achieve a visual hierarchy by visually differentiating elements based on their levels of importance without compromising accessibility. Neumorphism might compromise UX for aesthetically pleasing UI if not done correctly.

With that being said, designers have been coming up with new design ideas that expand on the concept of neumorphism every day. I’m excited to see how this trend will change over time.